Due to personal reasons, for the time being, I shall be celebrating Women in Horror Month online, discussing the work of the incredible women I have encountered over the years and looking to what the future looks like for women working in horror. Jennifer xo
Find me on social media @jennifersbodies on Twitter and Instagram.
"Jennifer’s Bodies is a roving annual festival of female-helmed horror movies and part of Women In Horror Recognition Month, an international assortment of affiliated events organised partly to highlight just how much women can and do contribute to the genre outwith the typically accepted factors of tits, ass and mezzosoprano screaming." Starburst Magazine

Jen and Sylvia Soska - It Takes More than Just Good Looks to Get Them to Where They Are Now. They Work Hard, and Still Have Fun!

Jen and Sylvia Soska are two extraordinary chicks with big hearts and a gore~geous sense of imagination.  Yes, they are two very attractive girls who like to play dress up. They are basically the female versions of the dudes that would play Dungeons and Dragons and then go to Comic Con dressed as Batman.  Yes their costumes are incredibly sexy...but they are also incredibly fucking nerdy!!  And when you combine just how big a comic book nerds the girls actually are...they are UBER NERDS!!! 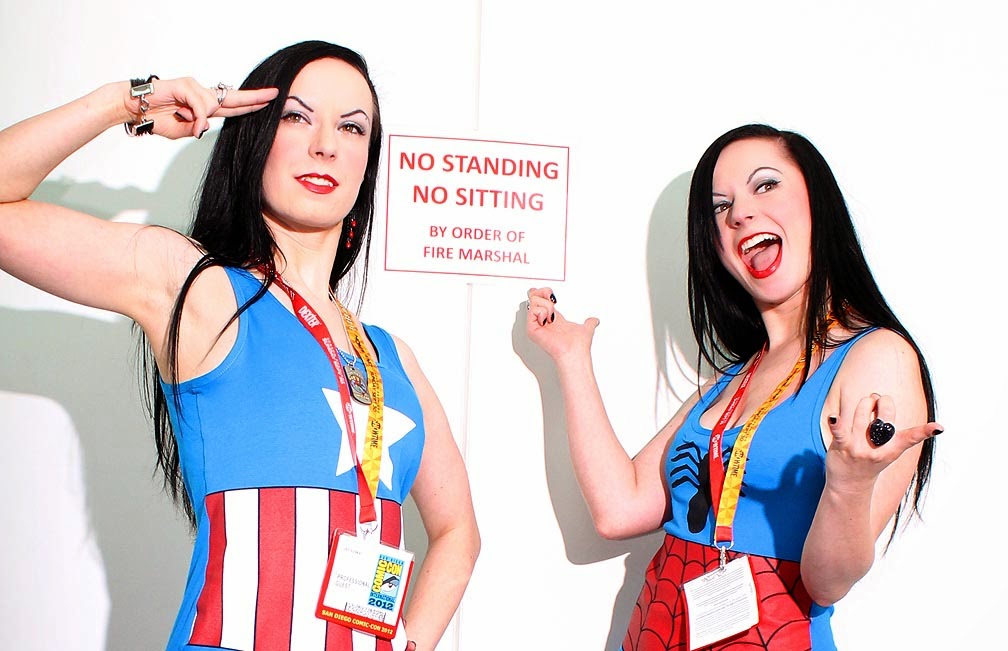 But yet for this, they get totally slated.  People are basically berating them for how they dress...as nerds!!  I mean, what the fuck!?!?!!!  How the fuck do all you haters expect them to dress!?!  I think that there is so much bitterness and general playground cattiness aimed at them and quite frankly it pisses me off!!  Do you not think that they got picked on enough in the playground just because they were different.  And remember, this was back before when it was "cool" to be a nerd!  And you know something...if they were FAKE nerds, then yeah, all y'all nerds would have a reason to be pissed off at them.  But in fairness, they're two of the biggest fucking nerds I've ever met!  And I am a great big fucking nerd!!

They have worked hard to get to where they are.  They have basically not stopped working for well over 5 years.  Any hot chick can wear a skimpy outfit.  Do you not think that Hollywood producers see enough of that coming through the system EVERY FUCKING DAY!!  Jen and Sylv went against that sleazeball system and raised the funds to make American Mary themselves, and wrote it as a statement against all the shite that goes on there! 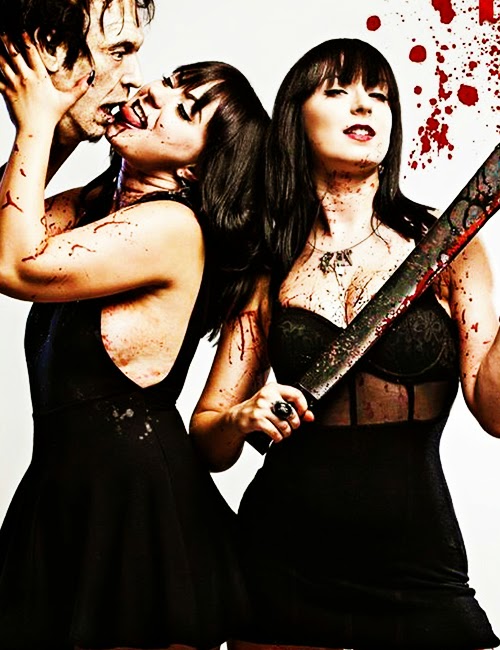 They inspire women to embrace their sexuality, no matter how they look.  Yes, the whole twin thing might seem like a bit of a gimmick to some...but that's how they were born!!  That's how they naturally are.  They're not some product squeezed out of a production line.  So why people feel the need to constantly pick them apart, it is so pathetic.

And anyhoo...more to the fucking point...they have given the horror world Tristan fucking Risk.  That is reason enough to love them alone!! 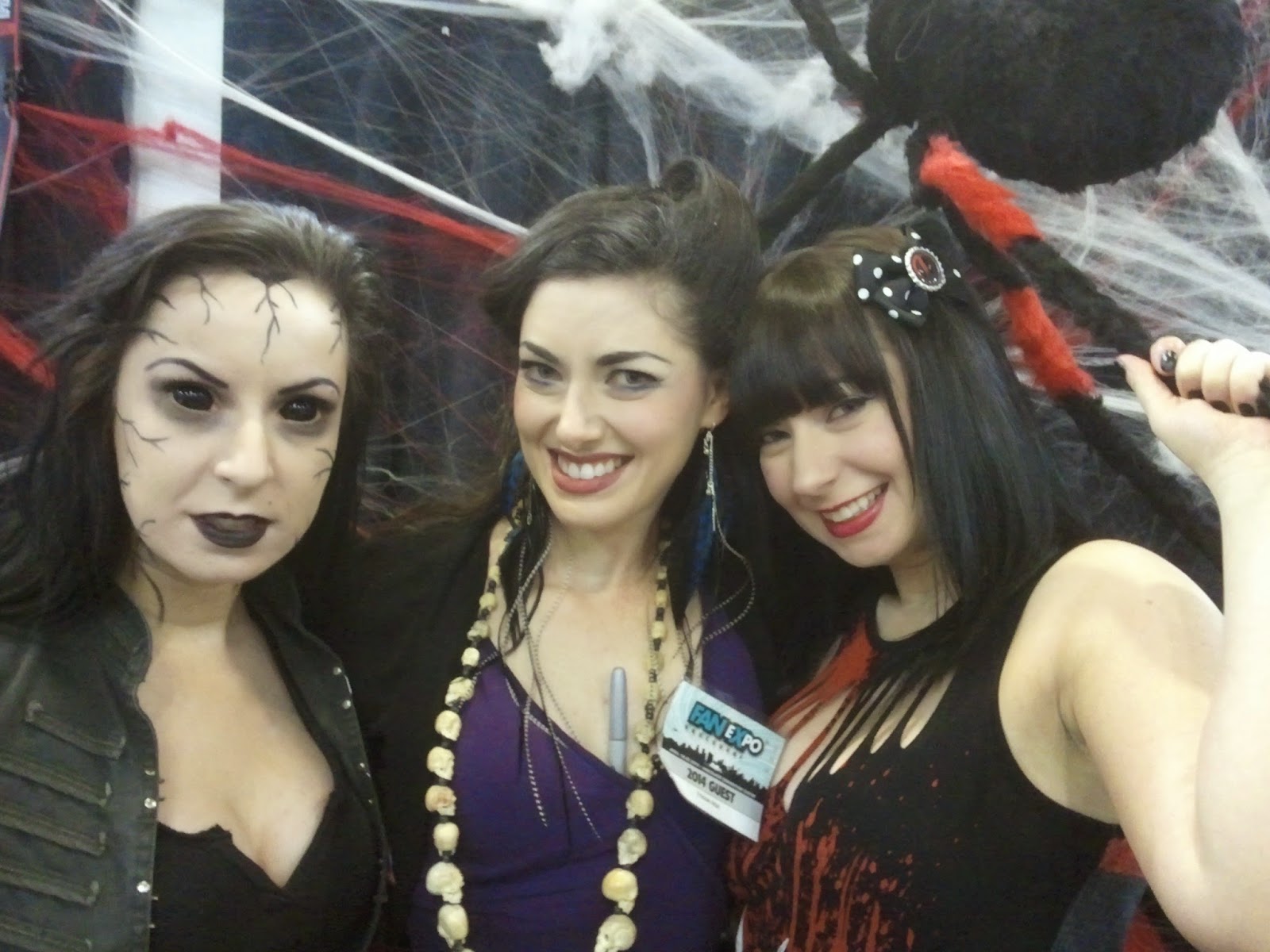 Jen﻿ and Sylv﻿ don't only embrace the horror world that they have adored since they were creepy wee kids, they use their voice to help out some amazing causes too.  Their main one is to inspire people to donate blood, and for the past five years, every year they have released a new PSA to help them with their goal.  At the bottom of this post is the one from February 2012, when they had just finished filming American Mary and got some of the cast to join in the fun and get all bloodied up! :) 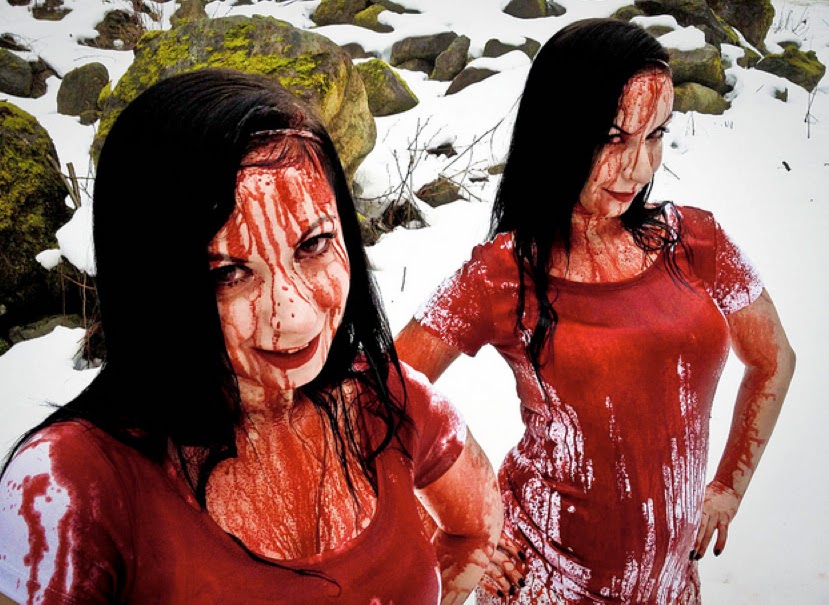 Just because a girl has a personality and is attractive, it does not make her an incapable moron who does not deserve the same opportunities as the men in her field of work.  And let's face it...a lot of the complaints I'm seeing come from men!  Which to me just looks like jealousy.  Jen and Sylvia have personalities, and women are totally getting behind them.  Surely if we're going by standard conventions, if a girl is using merely her looks to get her places, then generally women are gonna call that shit out, and NOT support them!  That is not the case here.

For those that say how can they be feminists when they wear such provocative clothing?  Being a feminist isn't about what you wear...it's about what you DO, and Jen and Sylv have helped to give a voice to women within the horror community!  And they're actually making it into the boys club with their inclusion into The ABC's of Death 2, See No Evil 2 and various other cool projects.  As is Mexican Gigi Saul Guerrero, yet another hot, but insanely talented chick who I'm sure will have to deal with this kinda shit as well...just because she's young, attractive and outgoing!

UPDATED to add pics of these nutters all FINALLY together, and with Gigi doing a segment on the 2015 Massive Blood Drive PSA.  Yay! :) 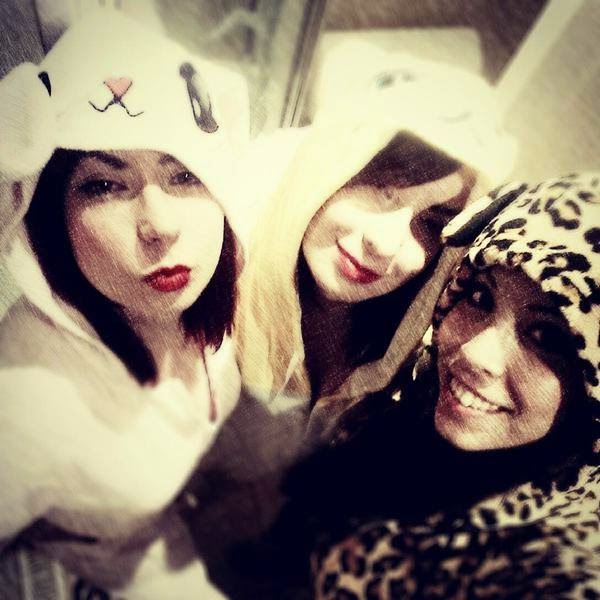 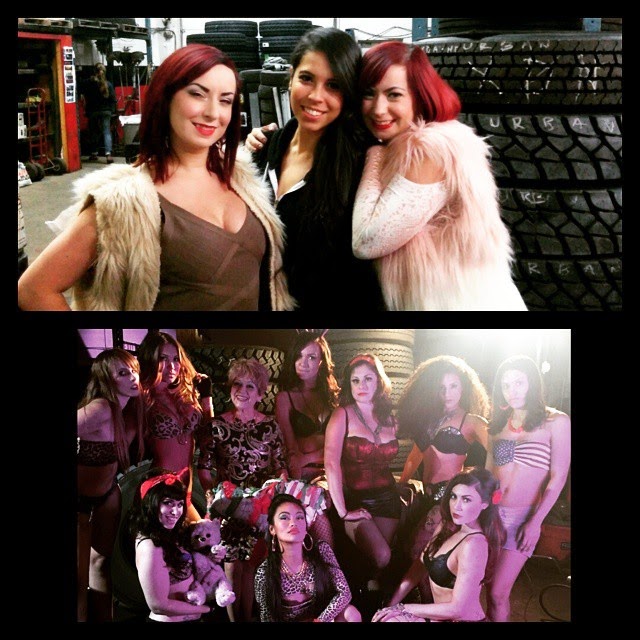 When all is said and done, at the end of the day, it doesn't matter how fucking hot you are....if your film is shite, then people are gonna see through that straight away.  Jen and Sylv have slaved their arses off to get to where they are.  They  have put their OWN money into every single project they've worked on...including See No Evil 2.  Which another thing...they've been getting shit for doing that as well.  Has it not occurred to any of the haters that they actually WANTED to do this film.  The first film was just a fun slasher...so what is wrong with wanting to do an established fun slasher!?!  And to cast two of the most bad ass chicks in horror...Katherine Isabelle and Danielle Harris!!  If I had established myself as a director, and someone asked me to do a Friday the 13th sequel, I'd totally be on that bitch in a microsecond!  Because as silly as the films are...I fucking love Jason Voorhees, and think the films are awesome stupid fun! 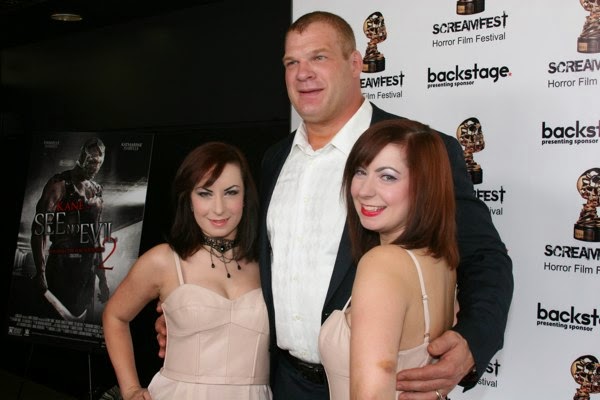 There is way too much pretension within this genre sometimes; people forget that it's about having fun at the same time.  Did Joe Lynch get shit for doing Wrong Turn 2??  Not like this he sure didn't!! And Wrong Turn 2 is fucking awesome!!!  Because they brought in someone who was a huge fan of the genre and did something fun with it!  And in fact...I actually prefer it to the first one.  :)

At the end of the day, haters gonna hate.  I personally find it rather pathetic to be honest.  If you don't like them, fine.  Don't resort to name-calling and all the playground shite that comes along with it though.  These girls work hard and have fun whilst doing so.  Sounds like a pretty fucking sweet deal to me!  I think that Truth or Dare director Jessica Cameron sums it up perfectly...Haters Gonna Hate! Simples.  :)

Please don't be a douche...the comments section is there for constructive criticism and praise...not for asshole trolls to rant! Ya dig!?!